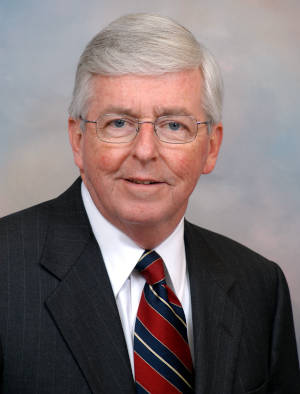 Keightley & Ashner LLP is mourning the passing of founding partner Jim Keightley.  The firm is forever indebted to Jim for his key role in establishing the firm, for his countless contributions to the firm’s success, and for his wise counsel to, support of, and friendship with all of us at K&A.  He will be missed by so many people whose lives he has touched.

Jim was born in Philadelphia, PA, on May 23, 1942, and passed away in Alexandria, VA, on October 31, 2021, from lung cancer complications.  He was predeceased by his parents, Gerald E. and Helen (Frawley) Keightley and his brother Gerald Keightley, and is survived by his loving wife Bonnie, daughters Tricia Keightley (Daniel Davidson) and Susan Keightley (John Daley), grandsons James and Thomas Daley, brother Thomas Keightley, and sister-in-law Georgia Masters Keightley.

He served as General Counsel of the Pension Benefit Guaranty Corporation from 1995 to 2005. In that role, Jim supervised all litigation, regulatory, and advisory matters arising under the PBGC’s termination insurance program. Since the General Counsel lawyers represent the agency independent of the Department of Justice, he was extensively involved in major bankruptcies and litigation in the Courts of Appeal as well as the Supreme Court of the United States. In 2005, he left PBGC, along with Deputy General Counsel Bill Beyer and Assistant General Counsel for Legislation and Regulations Harold Ashner, to form Keightley & Ashner LLP.

Previously, Jim had a long career at the Internal Revenue Service, most recently as Special Counsel for Large Cases from 1991-1995 and Associate Chief Counsel for Litigation from 1982-1991. In those positions, he played a key role in substantive and procedural litigation for the largest and most significant cases in the Tax Court, as well as refund forums, including the United States Court of Federal Claims.

Jim was on the ALI-ABA faculty from 1986-1994 on “How to Handle a Tax Controversy at the IRS and in the Tax Court.” He was a visiting lecturer at the University of Virginia Law School in 1986, 1997, and 1998 on tax procedure and retirement financing.

Jim was also a founding member and Master of the J. Edgar Murdock Inn of Court (Tax Court) from 1988-1996, and has served as a member of the United States Court of Federal Claims Advisory Council from 1985-1995. In 1995, Jim left the IRS Office of Chief Counsel and became PBGC’s General Counsel.

Jim was a member of the Finance Committee of United Way Worldwide and served as Chairman of its Pension and Investment Subcommittee.  He was selected by his peers for inclusion in The Best Lawyers in America© list for 2019, 2020, 2021, and 2022.  He has a J.D. from Cornell Law School (1967), an LL.M (Taxation) from the George Washington University Law School (1970), and a B.A. from Villanova University (1964), and was a member of the bars of the District of Columbia and of Virginia.

Donations in memory of Jim may be made to SOME (So Others Might Eat) at some.org or ACT for Alexandria at www.actforalexandria.org.